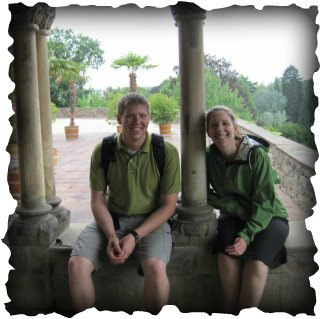 ﻿ Join Mr. and Mrs. Rude as we blog about their exciting life.  Vicariously, travel to South Korea with us as we begin a new adventure teaching first grade and P.E.

I’m Mrs. Rude, a first grade teacher from the Seattle area.  I have been teaching for seven years and am taking a sabbatical to teach overseas.  I love to read, see the beautiful world God created, and eat Mr. Rude’s tasty cooking.  If you stopped by my classroom you might hear me singing songs or directions and my students soon learn to join in the fun!

I’m Mr. Rude.  Mrs. Rude and I are finally setting off on our great adventure!  After living abroad in China and working with international students in American I am ready to take on the challenge of teaching.  I am the one who loves to cook, nap after eating, and plan our next adventure.


7 To know about Mrs. Rude
1. Elementary school teacher, favorite grade: first grade
2. Wannabe Broadway star (also does good Disney character-singing voices! Which annoys Zack)
3. Middle sister out of three girls.... with only one bathroom growing up!
4. Expert dishwasher, my dad always said he didn't need to get a dish machine because he had three healthy dishwashers!
4. Consumes books at a ridiculous rate. (Highly recommends the Overdrive app!)
5. Traveled to: England, Wales, Scotland, Ireland and Alaska with 5th and 6th graders!
6. Will never get bangs (fringe) again!
7. Owner of two Norwegian bunader

7 things to know about the Rudes as a couple:
1. Actually met at age 11ish...we think.
2.  Have traveled Internationally: Norway, Germany, Czech Republic, Sweden. (And Canada! Does that even count?)
3. Some people know us as Rolf and Vanja
4. Enjoy going to any stage production! (Wicked is a fave!)
5. Once went kayaking... and ended up buying a whole case of wine :)
6. While dating spent more time apart than in the same state.
7. Are Wannabe foodies

7 things to know about Mr. Rude:
1. Loves to be in the kitchen and prefers baking over cooking.
2. Went to private school Pre-K through College
3. Spent one of his semesters his junior year of College abroad in China
4. Second oldest in a family of four, two sisters, one brother.
5. Spent 3 years trying to talk Mrs. Rude into teaching overseas. ;) (Still cannot believe she finally agreed!)
6. Really wants a dog. Got a stuffed one from my mother-in-law when I put one on my Christmas list.
7. Once interviewed, job trained, and showed up for the first shift at a job and they had no idea who he was...Fail!

We will be living in Yongin, South Korea about 30 minutes South of Seoul.
Powered by